Burkes The General Armory gives the following arms as belonging to FINCHAM of the counties of Cambridge and Norfolk:

Argent, three bars sable, a bend ermine. Crest: a hind’s head erased or, in the mouth a branch of holly vert, fructed gules.

Here is an inexpert attempt at a painting of these Arms. The hind looks far too cute, considering the manner of her decapitation! (See below.)

For those not familiar with heraldry, we repeat the blazon with our own explanation.

Argent [silver, the main colour of the shield], three bars sable [three horizontal stripes, in black], a bend [diagonal stripe from top left to bottom right] ermine [one of the furs of heraldry, represented as white with black markings]. Crest [worn on the helmet]: a hind’s head erased [torn from the neck, leaving a jagged edge, rather than cut cleanly] or [in gold], in the mouth a branch of holly vert [green], fructed gules [with red fruit].

Blyth quotes the following Motto as part of the Arms, but we did not see it in the reference books: Arbore latet opaca [Hidden by a shady tree].

These Arms are loosely referred to as the family Arms, but in English law the arms as originally granted pass only to the eldest son, and the direct line of descent appears to have terminated in the sixteenth century. Consequently no-one at present has a right to bear these Arms.

We have no information about the granting of these Arms. The earliest mention in Blyth concerns the seal of Simon (or Symeon) de Fyncham (see below), which incorporates the Arms. Symeon, who died in 1458, was a generous benefactor of St. Martin’s Church, and the Arms appear on the buttresses of the tower, as well as in various places in the interior.

Blyth also mentions the appearance of the Arms in the chapel of St. Nicholas in the church of St. Clement in Outwell, where they are quartered with the Arms of Haultoft. John Fincham, a grandson of Symeon, founded the Outwell branch of the family when he married a Haultoft in 1485 – see the Fincham Family page.

Some seals bearing the Arms or Crest, which belonged to Alfred Fincham (died 1862), are pictured in the page about Alfred’s descendants.

The College of Arms

These three seals are copied from Blyth’s book. 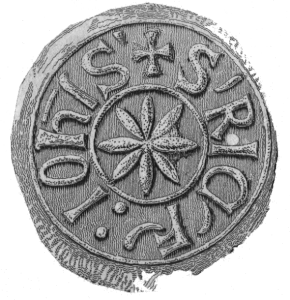 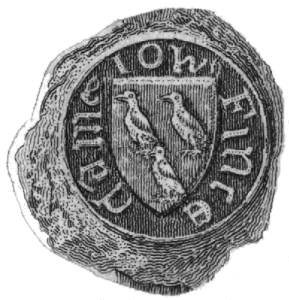 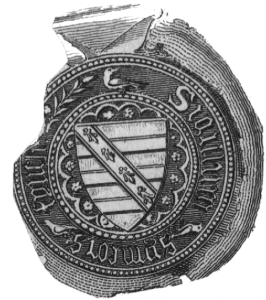 Seal of Simeon de Fyncham, son of John, ~1450. It shows the Fincham Arms with the inscription SIGILLUM SYMEONIS FYNCH–, the words being separated by three finches

The swan “anciently graced the tables of the great”, as Blyth puts it. As they were allowed to stray freely on the various river systems, their ownership was indicated by marks made on the upper beak. These are some swan marks belonging to the Fincham family in the 16th and 17th centuries. They were taken from Blyth’s book, and redrawn.